There are only three weeks left in 2014. (By the way, I say “twenty-fourteen”. You? It’s saving just a single syllable, I know, but it feels less unwieldy than saying “two-thousand-fourteen”. And no one ever said “Let’s party like it’s one-thousand-nine-hundred-ninety-nine”.)

I’ve been counting down to the end of the year in an attempt to finish strong, to end the year with momentum rather than in a carb-fueled haze of regret. I’ve been grooving some new habits into my daily routine and building my days around them. I wake up and check my Habit List app first thing and know I’ve got to check off those habits I’ve chosen for the day. And it’s been a success so far. I’ve transformed my mornings by rising early and meditating daily. (This habit is the one that has the potential for the greatest impact over the long term. I’m starting to get what a game-changer meditation can be.) I’m walking at least a mile every day. I’ve stuck to my push-ups routine. And here I am posting every day.

Granted, this is over a fairly short period of time. But as the new year approaches, I’m now excited about the possibility of building habits and routines to stick with over an entire year and seeing where that gets me. I can see the power of just plugging away at a habit or a simple routine without worrying about some distant, possibly arbitrary, goal. And then I imagine looking up months from now and being surprised at the transformation.

Doing a small thing consistently over a long period of time can lead to a big change in a way that trying to cram big things into a short time never will. 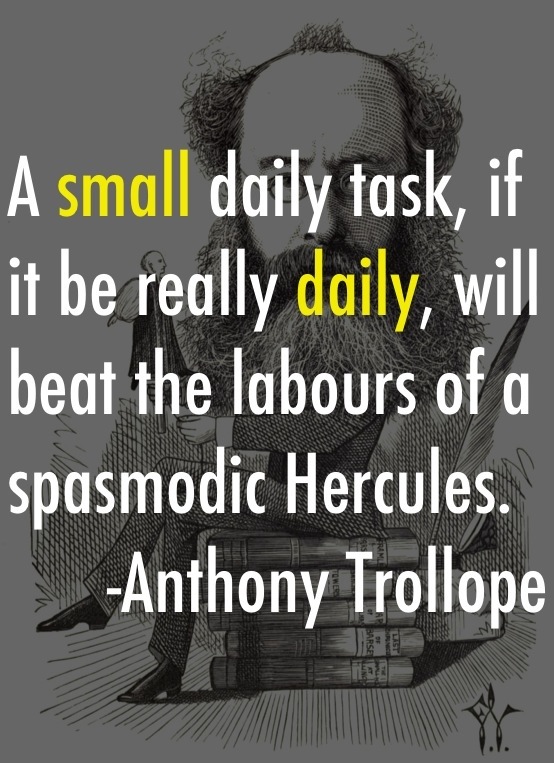