“If you’re polite and if you read, I think you’ve got the first 75 steps down the path to success.” –Tom Peters

Be kind. Be curious.

“The good life is one inspired by love and guided by knowledge.” –Bertrand Russell

“If we are not sometimes baffled and amazed and undone by the world around us, rendered speechless and stunned, perhaps we are not paying close enough attention.” –Ben Marcus

Perhaps we are sleepwalking through life, trudging obliviously through the pattern we’ve grooved and smoothed to protect ourselves from the unevenness, from the surprises of reality.

Moments of genuine, bracing presence shine in my memory for their rarity.

You can’t live in perpetual amazement. (Some do, I suppose. Mystics or saints or those we deem crazy and avoid on the sidewalk.)

But even occasional doses of bafflement—with the infinite sky, with the joy or anguish of an open heart, with the sheer oddity of being alive and aware—would be a potent enough tonic for our numbness.

I somewhat randomly clicked on this TED Talk by Harvard researcher Robert Waldinger this week.

He has carried on the research in one of the longest running research projects of its kind, the Harvard Study of Adult Development. For more than 75 years data has been collected that has led to some clear answers about what makes for a good life.

Younger people tend to predict that fortune and fame will lead to happiness. That prediction doesn’t hold up.

Studying older people who have lived more life shows there is one key indicator for happier and healthier lives.

It’s actually simple and ultimately rather obvious. According to Waldinger and the study’s research, this is your ticket to a good life:

It’s all about relationships.

Not only will you have a happier life if it’s built around positive relationships, you’ll live a healthier and longer life as well:

“The people who were the most satisfied in their relationships at age 50 were the healthiest at age 80.”

Even brain health and mental function were notably better later in life for those who reported stronger connections in their relationships.

Waldinger closed his talk with this:

“The people who fared the best were the people who leaned in to relationships—with family, with friends, with community.”

“The good life is built with good relationships.”

I think most people will say they want a life filled with good relationships, but how often are we intentional about investing in our connections with family and friends and community?

What if you “leaned in” to the relationships that matter most? Imagine making family and friends your true priority in the way you spend your time and where you devote your greatest energy and creativity.

If you want a satisfying life, career success and financial well-being should be subordinate to the strength of the connections you make with the people who matter most.

If you don’t have close friends, make some. If your family life is suffering, get busy making it better. If you don’t have a community that you support and that supports you, do something about it.

Life as a human here on Earth is ultimately all about relationships.

“There isn’t time—so brief is life—for bickerings, apologies, heartburnings, callings to account. There is only time for loving—and but an instant, so to speak, for that.” –Mark Twain

This is a fitting day to reflect on a couple of profound thoughts from Dr. King.

The first is on Apple’s home page today:

And this one offers credible hope when the future appears dismal:

“The arc of the moral universe is long, but it bends toward justice.” -Dr. Martin Luther King, Jr.

No matter how bleak or infuriating human progress may look in the moment, we have come a long way.

And in the long run, we will go even further.

We will get there faster, though, if more people more regularly pondered the question in the first quote above. 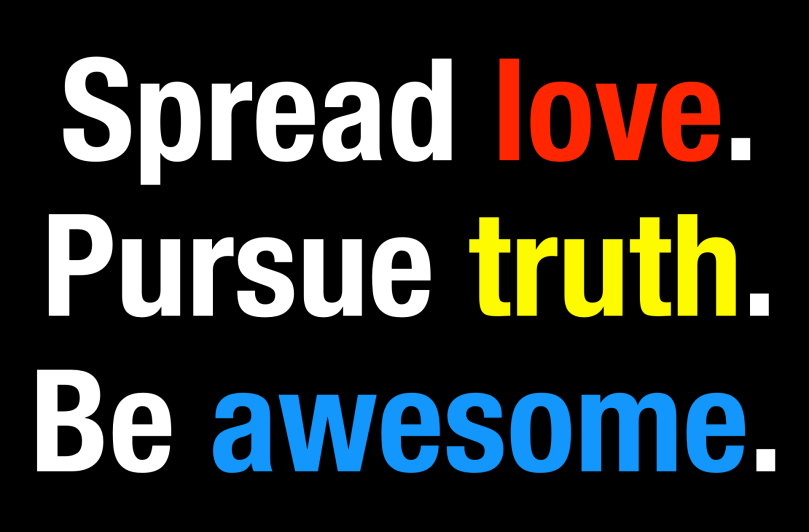 This was the closing challenge I offered in my speech to college students last week. It’s distilled from this Bertrand Russell quotation:

“The good life is one inspired by love and guided by knowledge.” –Bertrand Russell

The “Be awesome” part is redundant, I know.

If you’re spreading love and pursuing truth, you can’t help but be awesome.

“We rise by lifting others.” –Robert Ingersoll

“…the only people for me are the mad ones, the ones who are mad to live, mad to talk, mad to be saved, desirous of everything at the same time, the ones who never yawn or say a commonplace thing, but burn, burn, burn like fabulous yellow roman candles exploding like spiders across the stars…” –Jack Kerouac

I know I’ve got this touch of glorious madness in me. You do, too.

But I do yawn and say commonplace things not infrequently.

Sometimes, though, as if a switch gets flipped, I come alive and burn a little brighter.

We need to switch to madness mode more often and override the default yawn state most of us have grooved into our daily lives.

Your public display of madness just might infect and transform, even if just momentarily, a yawner or two.

Regularly seeing yourself in the context of the universe—just how small and insignificant you really are—will nudge you back off the ledge.

You are unique. There has never been and will never be another you. Be the best expression of you you can be.

But you are just an infinitesimally small part of the universe. It doesn’t spin around you. It’s mostly indifferent to you. It will go on just fine with or without you.

And maybe that should hurt my ego, but instead it frees me to not take myself too seriously.

Thinking this way can free us to just enjoy the ride and relish our good fortune to have made it onto the stage in our bit part in this grand cosmic extravaganza.

“Place no head above your own.” –The Buddha

Don’t believe something because someone says to believe.

Use your own head.

Discard what doesn’t hold up to honest inquiry.

Pursue truth, no matter the cost.

Profound, but so straightforward and simple.

When you feel inclined to judge, try instead to understand.

I’m with Lawrence on this. There’s even research showing that we are most consistently happy when we are lost in a moment, when our minds don’t wander and flit from one distraction to another.

What triggers a flow state for you? Can you make that happen more often?

More happiness is there to be tapped, and it’s those flow states where you’re most likely to produce remarkable work, meaningful art, and deep connection with others.

“If you can see your path laid out in front of you step by step, you know it’s not your path. Your own path you make with every step you take. That’s why it’s your path.” –Joseph Campbell

The power of low expectations and the joy of “small mercies”:

“I am thankful for small mercies. I compared notes with one of my friends who expects everything of the universe and is disappointed when anything is less than the best, and I found that I begin at the other extreme, expecting nothing, and am always full of thanks for moderate goods.” –Ralph Waldo Emerson

If I’m expecting the universe to grant me a great parking space or extravagant prosperity or fairy tale love, I better get used to disappointment.

The universe is busy spinning galaxies into infinity and keeping my atoms together so I can go on being me for a little while longer.

But wonders abound, and I just need to see and be grateful for the small joys I continually stumble across every day.

I’m thankful for a car to park anywhere, my average middle-class comfortable prosperity, and my sweet, everyday-joy kind of love.

Small mercies and authentic wonders can fill a day — and a life’s worth of days — with the best the universe has to offer.

“BEWARE THE BARRENNESS OF A BUSY LIFE.
—Socrates”

My busy Saturday today centers around two key commitments with my daughters: the pool this afternoon and the movie Tomorrowland tonight. I might squeeze in some reading if I find some down time.

This is my kind of packed schedule.

My 7-year-old daughter came by my office after school on Tuesday. It’s the last week of school, and she was lively and lighthearted and spent some time, as usual, writing on the whiteboard in my office. When I left work I noticed she had written this on the board:

“When given a choice to be right or kind, choose kind.”

I paused and wondered where a 7-year-old came up with such a thoughtful bit of wisdom, but I forgot to ask her about it.

The next day my wife and I attended the end-of-year party for her second-grade class. Her teacher, Ms. McCranie, is a superhero of a teacher, and she’s retiring this year after a long and remarkable career. As Ms. McCranie was giving out the academic awards she came to the Citizenship Award and explained that it was awarded primarily for kindness. She said she tells her students that, “when given a choice to be right or kind, choose kind.”

“Aha”, I thought. That’s where my Annie got that wisdom. And I was so impressed that this thought had been impressed in my daughter’s consciousness so distinctly.

And then Ms. McCranie announced that the Citizenship Award for her class was being awarded to Annie.

Her mom and sister and I are entitled to smirk at this slightly, knowing what it’s like to live with her occasionally feisty and fiery moods. But if in public and at school, at least, she’s demonstrating enough kindness to win a class award and she can quote verbatim such solid wisdom, I’ll take it.

I need to have that wisdom impressed on me regularly as well.

“Don’t think about why you question, simply don’t stop questioning. Don’t worry about what you can’t answer, and don’t try to explain what you can’t know. Curiosity is its own reason. Aren’t you in awe when you contemplate the mysteries of eternity, of life, of the marvelous structure behind reality? And this is the miracle of the human mind—to use its constructions, concepts, and formulas as tools to explain what man sees, feels and touches. Try to comprehend a little more each day. Have holy curiosity.” –Albert Einstein Back to top
Excellent Journey
Blog at WordPress.com.
Loading Comments...