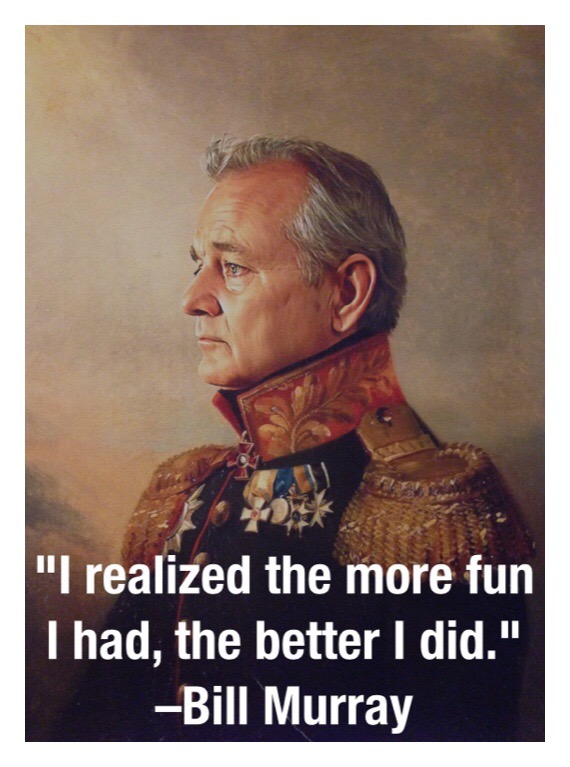 On the job fun:

Murray’s St. Vincent co-star Melissa McCarthy confides, “Bill literally throws banana peels in front of people.” I assume she’s using “literally” to mean “metaphorically,” as many people do, but it turns out to be true: Once during a break in filming when the lights were getting reset, Murray tossed banana peels in the paths of passing crew members. “Not to make them slip,” McCarthy clarifies, “but for the look on their face when they’re like, ‘Is that really a banana peel in front of me?'”

Murray transforms even the most mundane interactions into opportunities for improvisational comedy. Peter Chatzky, a financial-software developer from Briarcliff Manor, New York, remembers being on vacation at a hotel in Naples, Florida, when his grade-school kids spotted Murray having a drink poolside and asked him for autographs. Murray gruffly offered to inscribe their forearms but ended up writing on a couple of napkins instead. Jake, a skinny kid, got “Maybe lose a little weight, bud,” signed “Jim Belushi.” Julia got “Looking good, princess. Call me,” signed “Rob Lowe.”

Murray has realized that it’s when he’s having fun that he is most truly himself and able to offer his best:

Like all of Murray’s best film work, it originates in his stress-free mentality. “Someone told me some secrets early on about living,” Murray tells a crowd of Canadian film fans celebrating “Bill Murray Day” that same weekend. “You can do the very best you can when you’re very, very relaxed.” He says that’s why he got into acting: “I realized the more fun I had, the better I did.”

I need to be reminded regularly to not take life so seriously. A guy like Murray is probably constantly asking himself, “What’s funny about this situation?” or “How can I have fun with this?”

My primary work is about providing experiences, and fun has to be a big part of it. Not scripted or programmed fun, but the kind that flows naturally out of the moment. I’ve got to keep reminding myself to actively model spontaneous fun and allow my team to relax and make some moments worth talking about for the people we serve. Break the pattern. Do the unexpected. But don’t try too hard.

My best presentations stand out in my memory for the fun I had connecting with the audience. When I deviate from the plan and say or do something unexpected or get the audience to laugh, usually at me. Walking into a moment with the attitude, “Let’s have some fun here” can make everything better, whether it’s a job interview or a first date or a presentation or even a Monday morning in your cubicle in a soulless, downtrodden workplace.

And reading this about Bill Murray is a good reminder to have more fun with my family, to be silly and spontaneous more often with my wife and kids. Now that we are back in a daily school and work routine, it’s easy to sleepwalk my way through each morning and evening, checking off the tasks. But it only takes a few moments of being truly awake to add real juice to your days and make them more meaningful and more fun.

And waking up, when sleeping is the norm, seems to be Murray’s ultimate aim, for himself and for those he encounters:

Another essential Murray principle: Wear your wisdom lightly, so insights arrive as punch lines. When pressed about his interactions with the public, he admits that the encounters are, to a certain extent, “selfish.” Murray shifts his weight on the couch and explains, “My hope, always, is that it’s going to wake me up. I’m only connected for seconds, minutes a day, sometimes. And suddenly, you go, ‘Holy cow, I’ve been asleep for two days. I’ve been doing things, but I’m just out.’ If I see someone who’s out cold on their feet, I’m going to try to wake that person up. It’s what I’d want someone to do for me. Wake me the hell up and come back to the planet.”