ESPN has a terrific Ivan Maisel story on their web site about the late, great Alabama football coach Bear Bryant.

Coach Bryant was born on this date 100 years ago and is easily the most iconic college football coach ever. The houndstooth hat, the affably gruff toughness, and all those championships make him stand out from his peers in the profession.

He was famous for pushing his players hard, for demanding more than was thought possible. But his high expectations and relentless pursuit of excellence paid off with six national titles for his teams. David Cutcliffe, Duke’s current head coach, worked for Coach Bryant:

Cutcliffe said what sticks in his mind is Bryant’s reasoning for pushing his coaches and players so hard.

“He used to say, ‘You can’t tell how a mule will pull until you hook it up to a heavy load,'” Cutcliffe said.

Championships are won in practice, and mastery and excellence are forged by taking on hard things, refining and tweaking, pushing to failure, and overcoming.

Bryant didn’t win his first national title until his sixteenth season as a head coach. You can bet the fifteen years before were filled with hard work and disappointment and discarded strategies and incremental improvements that didn’t make headlines. All of that made him into the championship coach he became.

John Wooden, the iconic basketball coach who is just as legendary for his attention to detail and commitment to continuous improvement, didn’t win the first of his ten national titles until his seventeenth season as a head coach.

Being awesome is not typically an overnight endeavor. 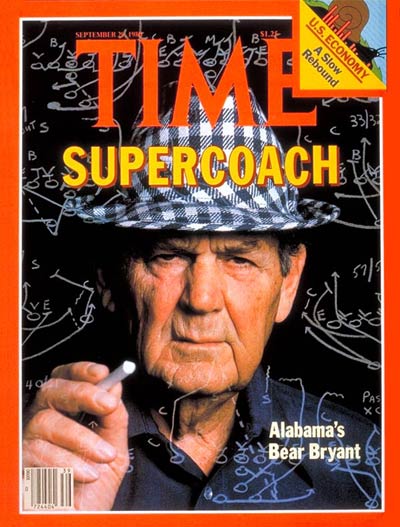